So, today I thought I’d write a bit about my Gay Fantasy Epic (TM), as I mention it approximately 26,000 times per post and people may in fact be wondering what the hell I’m talking about.

I also can’t think of a single other thing to write about, aside from a detailed description of my breakfast and a general wondering as to why I end up with peanut butter on the front of my sweatshirt EVERY SINGLE MORNING.

So, yes, let’s talk about my fantasy novel.

First, a tearful confession: “Gay Fantasy Epic” is actually not the title I have in mind for it. (I know. Heartbreaking.) The working title is Chosen, though it is also frequently referred to as “Nicky Ficcie” by certain friends of mine who also find it amusing to write parody fanfiction pairing my main characters up with sheep. But the less said about that, the better.

I’ve been working on it since I was about fifteen (back when dinosaurs still roamed the earth and we used mysterious black squarish things called “floppy disks”), and I’ve written and rewritten it so many times that I often get confused as to which version of events I’m currently writing. Which is a great place to be when you’re trying to write a horribly complicated fantasy epic, naturally.

The plot is based on the idea of a holy text having been translated and rewritten so many times that the original meaning is somewhat twisted, to the point that a group of people once lauded by the gods – the “Chosen” – are now seen as being evil and vile and just generally bad. “Abominations,” if you will. 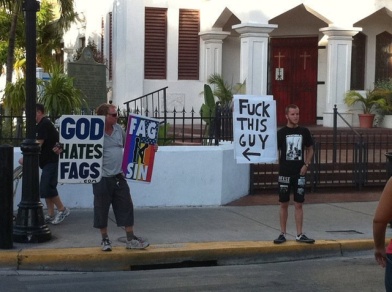 This is an entirely fictional idea with no possible parallels in the real world.

The main focus of the story is on Kaine and Nicholas, two young men who have been through a great deal of tragedy and general awfulness due to having been born “Chosen.” I really like them as characters, actually – Kaine is sarcastic and irritable and anti-social, and has never really had a friend before, whereas Nicholas is fairly happy and well-adjusted, though with some rather large issues of his own that he has to deal with. They’re brought together by a shared tragedy–

–and are able to build a really strong, affirming sort of friendship out of it. Their relationship is the real heart of the story, and I adore them so much that I’ve had a hard time writing a book that I feel is good enough for them. I do keep trying, though.

There are a lot of other characters, and some political things and world things and things things THINGS, but at the end of the day, it’s a book about two people finding each other and making each other’s lives a little better.

And that’s all I have to say about that. I will now go make lunch, and spend a few minutes gazing sadly at the pile of dirty dishes in the sink before shrugging and going back to ignoring their existence. Let Future Me take care of them, along with all the other things I’ve been putting off. She’s going to be so pissed. >_>