So, as I mentioned before, I’ve recently been working my way through Star Trek: The Original Series, which despite my all-around nerdiness and love of sci-fi, I’d somehow never seen before.

I’ve been very much enjoying the series (when not raging about its hilariously awful treatment of women), and have been compiling my thoughts and reactions while working my way from episode to episode. I offer them to you now, because otherwise, I have no idea what to post about.

Episode: Dagger of the Mind 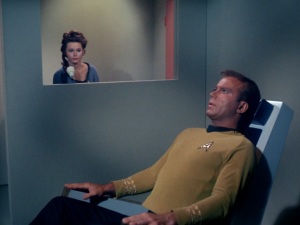 Kirk suspects that the head of a prison colony is using a mysterious machine to do something terrible to people’s minds. Rather than doing LITERALLY ANYTHING ELSE, Kirk chooses the obvious best solution and straps himself into the thing to find out how bad it really is. Because what could possibly go wrong?

The shocking conclusion: It goes horribly wrong and completely messes with his mind. Who could have foreseen such a thing? 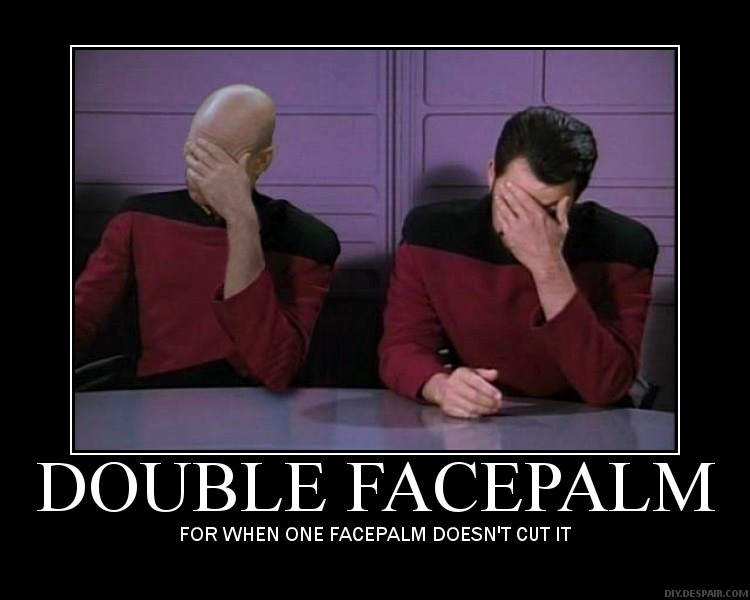 Episode: The Conscience of the King 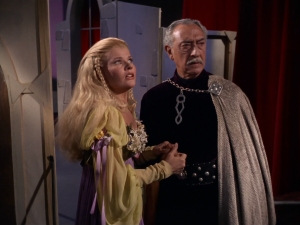 Hulu episode summary: “Star Trek: The Original Series | The Conscience of the King | Kirk is one of the last survivors who can identify a mass killer who lurks among a Shakespearean troupe aboard the Enterprise.”

One of those rare episodes where William Shatner, somehow, is not the worst offender when it comes to gross overacting. We do, however, get to see Kirk being several shades less than subtle in his “how YOU doin’? *leer*”-style advances towards the lead Shakespearean actor’s (pretty, blond) daughter.

I hope Bones routinely checks Kirk for Space Herpes, because damn, dude gets around. 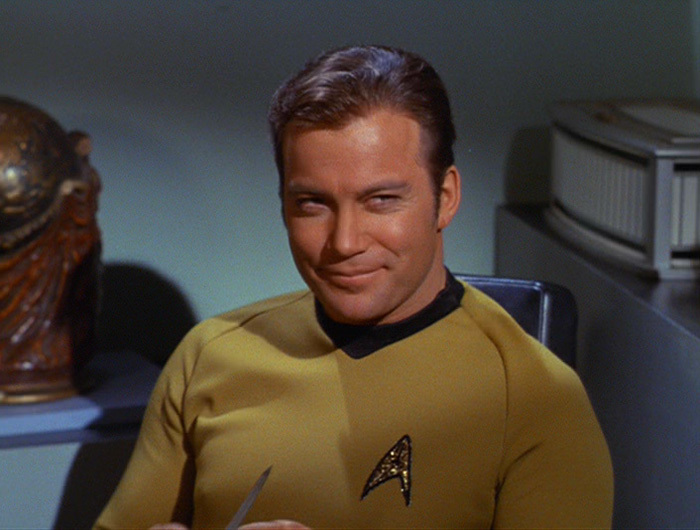 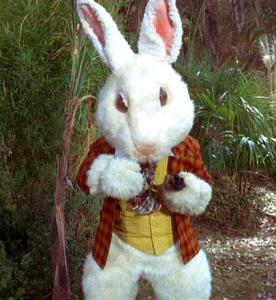 Annnnnnnd this guy just popped up in the episode I’m watching. Did he wander on-set from an Easter special or something?

Okay, so they’re on a planet that creates whatever they’re daydreaming about. 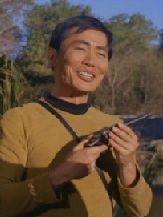 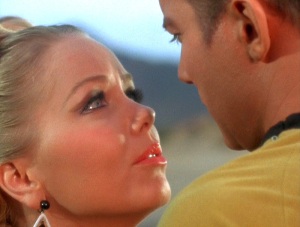 Kirk gets to see a woman he loved a long time ago (and finally beat the crap out of the guy who tormented him at Star Fleet Academy).

Dr. McCoy sees the white rabbit from Alice in Wonderland (get some help, Bones).

And the only female member of the group… 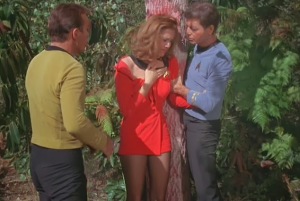 ……….is attacked and nearly raped by Don Juan.

What the hell’s up with that? Are they implying that she was walking around in the woods fantasizing about being raped or something?

But happily, she soon thinks of something she’d love even more than being violently raped by a fictional character: 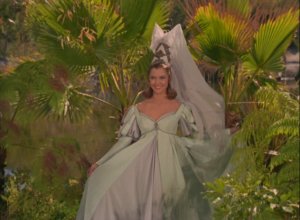 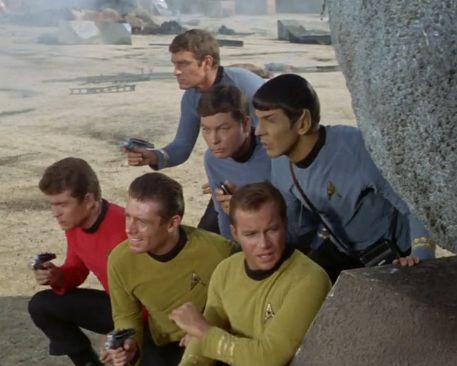 Hmm, I wonder which members of this group are going to survive this very dangerous planet…?

(Though actually, as it turned out, only the red-shirt got killed. The two other guys actually survived! But how long until they get Final Destinationed right out of existence? Only time will tell.) 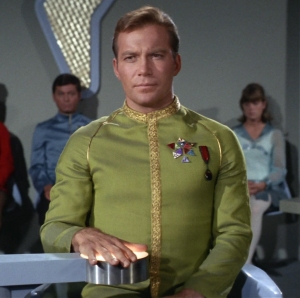 Interesting how everyone seems to keep forgetting that they have a computer on the Enterprise that can immediately tell whether a person is lying or not (as seen in Mudd’s Women). You’d think they’d actually use that thing from time to time. Like now, for example, when Kirk has been accused of perjury and may be court-martialed if he can’t prove he’s telling the truth.

Oh, but actually, it turns out that they don’t need to use it here anyway, because they have a video of the event in question but for some reason didn’t think to even look at it until midway through the trial.

Episode: The Devil In the Dark 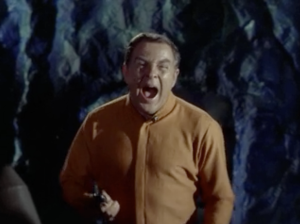 Boss Guy: We need you to keep guard all by yourself in this creepy mining tunnel.
Guy: But 50 people have already been killed by a monster down here.
Boss Guy: Yeah, and? You’ll have your phaser.
Guy: But we already know that phasers don’t do any damage to it at all, and the last guy who hit it with a phaser beam was horribly and gruesomely killed.
Boss Guy: OKAY BYE SEE YOU IN FOUR HOURS YOU’LL BE FINE

I’d been thinking, “Wow, I haven’t had any sexism-related rage during the last three or four episodes!”

………and then I realized that the reason for that was that there were no women at all in the last three or four episodes (except for Uhura in the background occasionally saying, “Yes, Captain”). 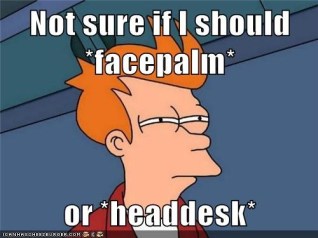 But then, something truly astounding occurred. 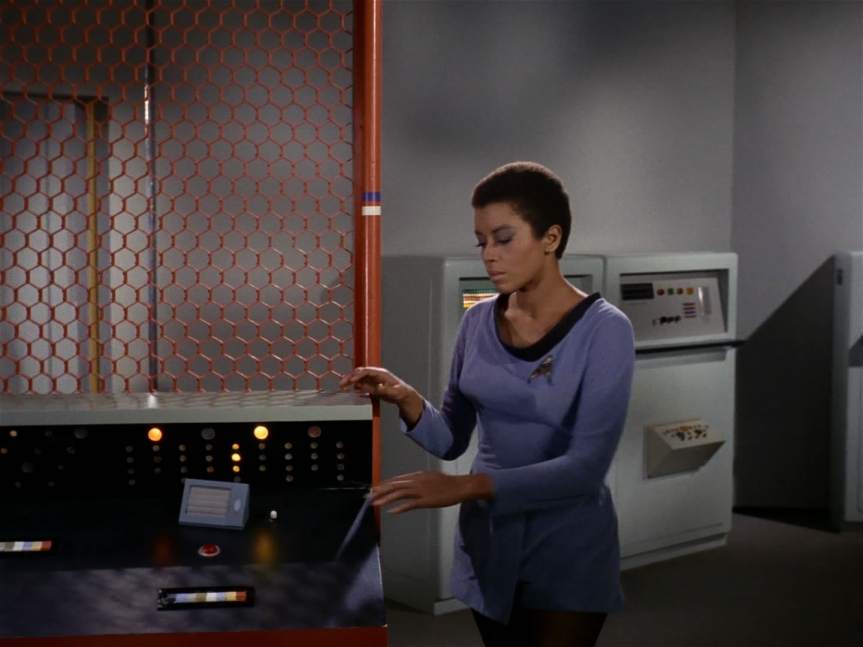 Good gods above. There was actually just a really awesome, cool, collected, professional, and in-charge female lieutenant in the episode I just watched, who did not once (a) get hit on by her sleazy male coworkers, (b) bring her male coworkers coffee, (c) scream and throw her hands over her face (I’m looking at you, Uhura), or (d) act like an idiot / child / both at the same time.

She got shit done, she treated her male subordinate with professionalism and confidence, and she never once lost her cool.