Skip to content
HomeWhich is full of love for Roger Radcliffe

Alas, my jury duty illness is still going strong, so I spent the majority of today convalescing at home with cat, blanket, and television.

Some of the things I did today, for anyone in desperate need of knowing:

It was an old VHS copy from 1992, and I very much enjoyed the little advertisement at the end informing me of a brand new Disney film apparently entitled, “Aladdin.” I doubt it’ll make any money, though.

2. I discovered that the 1997 Peanuts special “It Was My Best Birthday Ever, Charlie Brown” may actually be a top contender for “worst Peanuts special ever,” and yes, I’m including that one about the Flashbeagle when I say that.

It starts off with ten solid minutes of Linus rollerblading, followed by five minutes or so of awkward ’90s dancing, followed by about 45 seconds of Charlie Brown and Sally having actual dialogue, followed by another lengthy session of rollerblading (including some stunts that I suspect an eight-year-old has no business trying). There’s some semblance of a story after that (and a surprisingly lovely song), but there’s also a rather bizarre dissertation on the medicinal properties of various flowers in the midst of it, because if there’s anything kids are interested in, it’s botany.

Seen above: The writers’ meeting for this special.

3. I picked up some take-out from the diner down the street and feasted upon eggs, bacon, and pancakes for dinner, because being sick means never having to tell your stomach you’re sorry. <3 Or something. I don’t know. It was yummy, though.

4. I also spent a lot of time lying on my bed, staring up at the ceiling or at the wall, feeling too hot or too cold or too attracted to animated Disney characters from the 1960s. 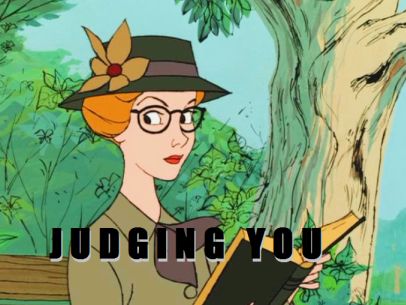 Tomorrow is the Chicago Pride Parade, so I’m hoping I’ll feel well enough to toddle on down there for a bit. If not, I’ll at least make sure to wear my Pride shirt while I’m curled up in bed watching old cartoons. Woo, Pride!

And so concludes this very important entry. I’m too tired/sick to end it properly, so let’s just look at Roger trolling Cruella De Vil by playing loud and nasty songs about her while she’s downstairs:

I’ve said it before, and I’m sure I’ll say it again, but I may need some kind of intervention.