Greetings! I’ve been half-awake for most of the morning, but I’ve still managed to teach some lessons, correct some homework, and do some cooking. As the cooking was actually successful, I thought I would include a recipe here, more so because the creation I speak of actually did not come from someone else’s recipe, and instead came from the depths of my fevered, chocolate-craving mind: 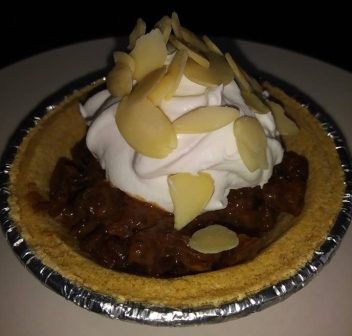 Ingredients:
-Medjool dates (4 or 5 = good)
-Cocoa powder (I just dumped some in, but uh, a tablespoon or so?)
-Vanilla extract, a few drops (optional but delicious)
-Store-bought mini (vegan) pie crust, because ain’t nobody got time for that
-1 can of unsweetened “classic” coconut milk
-Sweetener of some kind (agave, maple syrup, whatevs)

1. Put dates, cocoa powder, and vanilla extract in a food processor. Turn it on! Process! Hooray. (You can also add a little almond milk for a creamier texture.)
2. Refrigerate can of coconut milk (preferably overnight – should this be the first step? :P), then strain and scoop out the creamy chunk at the bottom. Blend with sweetener until it tastes…ya know. Sweet.
3. Smush the date chocolate stuff into the pie crust, top with coconut whipped cream (and a sprinkle of almonds or pecans, if you like that sort of thing), and then dig in.