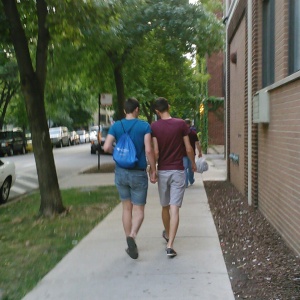 On this page, we’ll be going through popular anti-gay arguments and showing precisely why they’re silly and/or make no sense. Sound like fun? Feel free to join in in the comment space below.

The argument: Being gay isn’t natural.

But actually: Well, how can we argue with that? Oh, except that we can, because it actually is natural, as various members of the animal kingdom partake in same-sex encounters every day, and have been doing so for a rather long time. (There are even some rather famous gay flamingos in Britain who are famed for their excellent parenting skills.)

Second, let us consider a few things which are actually not natural: Dyed hair, genetically modified foods, any kind of plastic surgery, and a great many medicines and medical procedures. Shall we start protesting against those things, too? Or shall we perhaps realize that (a) being gay is natural, as seen by the above evidence, and (b) even if it weren’t natural, that’s a silly reason to hate something?

The argument: Gay marriage should not be allowed because we must uphold the values of traditional marriage.

But actually: The marriage we know nowadays can in no way be called “traditional,” as there have been a vast variety of marriage types that were perfectly acceptable throughout the years. One example would be that in olden days, arranged marriages were entirely acceptable, and often the brides were 14 or younger and had little or no choice in their future husbands. The idea of marrying for love was not a common one, and the wife’s primary duty was to stay at home, take care of her husband, and pop out as many sons as possible.

We have, however, modernized the institution of marriage to be more of a loving partnership between equals. Because as it turns out, just because something is “traditional” doesn’t mean it’s right or good or in any way worth preserving.

The argument: Homosexuality is wrong because the Bible says it’s wrong.

But actually: The idea of homosexuality being “a sin” has been very deeply ingrained in a lot of us, but how many people have bothered to look and see what the Bible actually says about it?

First, before we get into anything else, let us keep in mind that whatever your religious beliefs, it can’t be denied that the Bible has gone through thousands of translations and various different versions, and there is a fairly high chance that a lot of nuances and subtleties (and big glaring things as well, probably) were lost at some point along the way. It’s like a massive game of telephone, really.

But putting that aside, let’s go to what the Bible actually says.

Leviticus 18:22 – Thou shalt not lie with mankind, as with womankind: it [is] abomination.

A lot of scholars, it should be noted, believe that the abomination aspect of this act was more the idea of men demeaning themselves by acting  like women, and since women’s social status was just a bit below that of the family goat, this mandate makes a twisted, ridiculous sort of sense. If you’re a complete bastard, anyway.

Romans 1:27 – And likewise also the men, leaving the natural use of the woman, burned in their lust one toward another; men with men working that which is unseemly, and receiving in themselves that recompence of their error which was meet.

In this one, too, we see the idea of the “natural use of women.” Women are meant for sex and baby-making, and thus men need to ignore their burning lust for one another in favor of using the babymakers as they were meant to be used!

A few other things I would like to note about the “the Bible says so” argument, by the way:

1. There is not, to my knowledge, a single word in the Bible that says anything explicitly against lesbians (except for a vague reference by Paul, but who wants to listen to Paul?)  All we really get is repeated mentions of how men should not demean themselves by behaving like women, and should focus on making babies with the ladies rather than having pleasing encounters with one another. So, in conclusion: Whee, lesbians!

2.Jesus never says a word about homosexuality being wrong. You know why? Because Jesus is The Man, and he’s all about love, acceptance, and general awesomeness.  There’s even a bit in the Book of Matthew where Jesus rather openly says that there’s nothing wrong with being “born a eunuch,” which was a word associated at the time with gay or effeminate men. More on this here.

3. Leviticus, it should be mentioned, also has a variety of other mandates that  modern-day folks have no trouble at all ignoring as “outdated.” For instance, the book of Leviticus begins with a rather lengthy and detailed description of how to offer a sacrifice to the Lord (involving the killing and systematic deconstruction of several animals).

Moving on to other chapters of Leviticus:  Lying is a sin, to be atoned for by animal sacrifice. Eating fat, ox, sheep, or goat is forbidden. If you eat the fat of an animal, you must be banished from your people. If you eat any sort of blood, you must be banished from your people. Eating pork is forbidden. Eating any sea creature that doesn’t have fins or scales is an “abomination.”

Eating locusts, beetles, and grasshoppers is fine, though, apparently, so…yay?

These verses in particular are quite fascinating:

Okay, so, no blood, no magic, and no…looking at my watch?

Trimming your beard is a sin. Getting a tattoo–or, indeed, WRITING ON YOUR HAND WITH A PEN SO YOU DON’T FORGET TO PICK UP MILK ON THE WAY HOME–is also, in fact, a sin.

And there’s so, so much more, really. Have a look yourself if you feel so inclined: Leviticus, Bible Book of Madness

So, in conclusion, on the Bible argument:

(1) A lot of these anti-gay sentiments seem to be more anti-woman than actually anti-gay.

(2) There are plenty of things in the Bible that are recognized these days as obviously outdated (animal sacrifice, foods we can eat, slavery, etc.), so why can’t the “man shall not lay with man” bit be considered outdated as well?

The argument: Gay people don’t need to get married.

But actually: If two consenting adults love each other and want to spend the rest of their lives together, they don’t technically NEED to get married, certainly. But let’s keep in mind, too, that without marriage, these two people are not legally bound together, and so are denied a lot of the basic rights that married couples receive. Taxes, custody of children, hospital visitation rights, and just in general the right to make a legal commitment to spend their lives with the people they love.

Argument #2: But if gay people can get married, the birth rates will drop! THE HUMAN RACE WILL CEASE TO BE!

But actually: First, let’s keep in mind that the world is currently in a state of over-, not under-, population, and so increasing the birth rate is not our biggest concern (except to avoid top-heavy social security systems, but that’s another matter altogether). Second, and this is a big one: THESE PEOPLE ARE GAY. Denying them the right to marry will probably not lead to them shrugging and giving up on the whole “gay” thing in favor of running off to shack up with a member of the opposite sex and start popping out babies. With or without marriage rights, these people will probably still be with same-sex partners, because…ya know. THEY ARE GAY.

Argument #3: But gay people getting married will destroy the sanctity of marriage! It will no longer be a sacred commitment between two loving adults who intend to spend the rest of their lives together!

Yes, golly, it would be a shame if that happened.

So, here’s the thing: Not everyone gets married for the right reasons, and a lot of marriages end in divorce. However, has Kim Kardashian’s 72 hour marriage had any effect on your own marriage? Did it diminish your love somehow, or make your union less meaningful? I’m guessing that in fact, it didn’t. And the good news is that gay folks getting married will, likewise, have no effect at all on The Sacred Institution of Marriage. Except, of course, to allow a great many more loving adults the right to commit their lives to one another and be legally recognized as such.

The argument: Being gay is a choice.

But actually: If being gay is a choice, then this would imply that being straight is also a choice, and that human sexuality is a fluid thing that relies entirely on a person’s individual decisions rather than some innate orientation. And maybe it is – who knows. One thing I do know, however, is that it’s pretty difficult to “choose” who to fall in love with–or who not to fall in love with. It’s something that just happens, like foods you like or songs you can’t stand. Love just happens, naturally, and it’s the same with sexual orientation.

But if it wasn’t that way – if we could say with absolute certainty that no one is born gay or straight, that they just choose to be one way or another–well, then, what’s wrong with that? Two consenting adults choosing to be together – isn’t that essentially what straight marriage is, as well?