Today, I discuss such riveting topics as my failures at time management in online ESL lessons, what I ate for Thanksgiving, queer representation (or lack thereof) on “The Good Place,” and Darla’s new gnawing target, the Christmas tree. Also, I talk about grocery shopping, because I work from home now and grocery shopping is apparently a major highlight of any day. 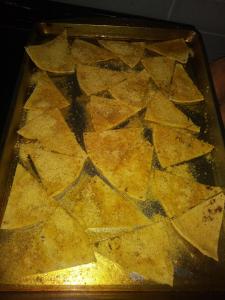 Given that there was nothing left in my vegetable crisper but kale and purple cabbage, I thought today might be a good day to actually leave my apartment and go to the grocery store. I trudged through the obnoxious Chicago cold (which isn’t even all that cold by Chicago standards) and packed my shopping basket full of veggies and vegan goodies, then trekked back with my shoulders weighed down by All the Things.

I’ve been wanting to try a vegan Dorito recipe for a while, and today I finally managed to get some corn tortillas and give it a try. Here’s the recipe, for those who are interested: Healthy, Dairy-Free Nacho Cheese Doritos

If you can’t be bothered to click (and let’s face it, this blog is a pretty awesome place, so I understand why you wouldn’t want to leave), you essentially stack up some corn tortillas and cut them, pizza-like, into Dorito-ish triangles. Next, you whip up a spice mix that involves nutritional yeast, chili powder, paprika, turmeric, and salt (and garlic powder and onion powder, though I omitted those and the chips still tasted amazing) and either mix them with oil or just coat the tortillas with oil and sprinkle on the seasoning. I did the latter, first spraying on olive oil and then, when the olive oil canister gave up the olivey ghost, using regular liquid olive oil and spreading it on the chips with a paper towel.

After that, you bake your seasoned tortilla bits at 400 degrees Fahrenheit for three or four minutes on each side, and bam, delicious chips.

I decided to take mine an additional step and make nachos out of them, so I added a bunch of random vegetables – tomatoes, green peppers, the aforementioned purple cabbage, and black olives. I also took the last of the seasoning and put it in the food processor with firm tofu and some vegan mayo, and that served as the basis of a “cheese” of sorts to spread over the chips.

Now, the chips themselves didn’t end up all that crispy – they came out a bit chewy, actually – so I probably either didn’t bake them for long enough or didn’t flip them well enough. Whatever the case, I can at least confirm that the seasoning absolutely does taste like the probably-actual-crack they put on real Doritos. It made for seriously delicious chips, very flavorful and naughty-tasting without actually being naughty, which of course is what we strive for in all things food-related.

For dessert, rather than making yet another mug cake (I may need an intervention on that front, actually), I took advantage of having fresh fruit and veg in the house and made a Chocolate Banana Avocado smoothie, which essentially contains all the things I just listed (half a banana, half an avocado, cocoa powder) + soy milk and a healthy squeeze of agave nectar for sweetness. I found a lovely little can of “Coconut Whipping Cream” at the grocery store, so I followed the directions (refrigerate the can overnight, then scoop out the coconut cream and mix with a hand mixer for three minutes) and glopped a ton of the stuff into my smoothie.

And yeah, that was pretty much amazing. I highly recommend the coconut whipped cream + anything chocolatey and sweet, because…yeah. Deeelicious.

Reviewing the things I ate today, I feel like I ate some extremely delicious stuff, but nothing was really unhealthy at all. A light spritz of olive oil on the chips, a little salt in the Dorito seasoning, and a small amount of sugar in the coconut whipped cream. I had lots of veggies and fruit, and even the corn tortillas were baked, not fried, so I’m feeling pretty good about my culinary creations overall.

Of course, I’m also very full and wanting to take a nap with the cats, but that’s just part of my life these days, it would seem.