So, it’s been awhile. A long while. A very long while. Vast ages of the earth have passed, civilizations have risen and fallen, lizardy creatures have risen from amoeba-filled puddles to reign over the land and subsequently be wiped out of existence, and during all that time, I have somehow failed to update my blog.

For my faithful readers, few and potentially mentally unstable though they may be, I offer my deepest apologies.

In any case, rather than getting too deeply into what I’ve been up to over the last few months (working, writing, writing, working, etc.), I’ll jump straight into the Very Important subject of this entry.

Today, dear readers, I would like to speak to you about a girl. And not just any girl, but The Girl, whose path happened to cross mine for one beautiful and fleeting train ride yesterday morning. What follows is a story of love and heartbreak, beauty and tragedy, lipstick and disappointing bumper stickers, in which the fondest desires of my fragile little heart were dashed to pieces by cruel, cruel fate.

Read on, friends, and ready yourselves for a tale of utmost woe.

END_OF_DOCUMENT_TOKEN_TO_BE_REPLACED

Greetings, my eager readers! After another lengthy period of blog neglect, I have returned!

Anyway, I’ve been hard at work on Chosen: Book II, and have written (and subsequently deleted) many new and interesting scenes! I’ve also used time when I should’ve been writing to do the all-important hunt for a Book II dream cast, and I’m pleased to announce that said cast has now officially been assembled. Behold!

A run-down of the characters, for those who might’ve missed the other 17,000 posts here regarding Chosen: END_OF_DOCUMENT_TOKEN_TO_BE_REPLACED

Greetings, internet. I have returned! You may rejoice if you wish.

So, yes, as for the reasons behind my lengthy hiatus, I have no excuses except that Chicago has been experiencing an unusual stretch of gorgeous weather, and thus I’ve been somewhat distracted by strange feelings of optimism and delusions that the world may not be such an awful place after all. Amazing what a little sunshine can do.

I’ve also been working hard on Chosen, and have actually finished – finished, I say, FINISHED – the first draft of the book.

And now, of course, I’m working hard on editing, adding new scenes, and in general trying to ensure that the novel I’ve been agonizing over since I was a wee gel of 15 does not, in fact, suck monstrously.

I’ve also made a rather significant change to the story, wherein main character Kaine and his love interest actually exchange words PRIOR to the last few chapters of the book. A radical notion, certainly, but one must take risks from time to time.

Said love interest is portrayed (in the highly unlikely dream cast of my mind) by Hunter Parrish, seen here looking angsty but very Nicholas-ish (albeit somewhat older than 16). I’m actually really enjoying having the chance to put him and Kaine together so much earlier in the story, as they have an interesting sort of chemistry. Kaine is sarcastic, defensive, and doesn’t bother much with this whole interacting-with-other-humans thing, whereas Nicholas seems to be normal and perfect and almost supernaturally well-adjusted. He has a devoted league of friends at school, he plays sports, he has two awesome, loving parents, and he’s just all-around the most irritatingly perfect person Kaine’s ever encountered. Kaine alternately hates him and longs to be him, and the really bizarre thing is that Nicholas genuinely seems to like him, and Kaine can’t quite figure out why. Of course, things in Nicholas Land aren’t nearly as perfect as they seem, which Kaine will eventually discover (drama drama drama).

Anyway, I’m working hard on getting the book finished, after which I’ll begin on my lofty goal of it becoming a massive hit and eventually leading to a movie deal and bags of money and Jon Stewart asking me to come on The Daily Show to discuss my awe-inspiring literary success.

In other news, I’ve finally watched Games of Thrones, which I have to admit is pretty damned compelling despite having given me borderline PTSD. (This due to the characters’ unfortunate tendency to misplace various body parts in the messiest and most disturbing ways possible.)

In any case, GoT has at least done the noble deed of bringing Thomas Brodie–Sangster to my attention. 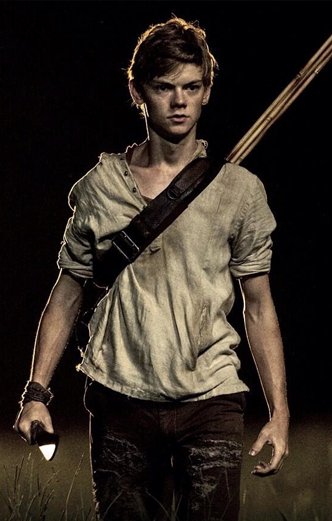 I’m determined to find a place for him somewhere in the Chosen series, because dammit, he’s awesome. So, People of the Earth, hear my vow: There shall be a role for this man in my series! Maybe Book II, maybe Book III, but somewhere in there, there will be a character he can play in the inevitable (and doubtless award-winning) screen adaptation. And at least I don’t have to worry about him getting too old for whatever role I may give him, as he seems to be permanently frozen at age 16. Most convenient.